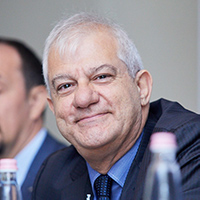 Ziya Gürün is the Technical Services and Research and Development Director of TUPRAS since July 2016. He has 30 years of experience in management, operations, design, and construction of refineries and product terminals. He joined Tüpraş İzmit Refinery as Production Group Manager in 2014 and served as Izmit Refinery Manager from February 2015 to July 2016. He worked as Project Director in STAR Project, an ongoing grass root refinery construction project in Turkey, from 2012 to 2014. He managed the product terminals of Opet in Turkey as Terminals Group Manager from 2004 to 2012. He worked for Bapco in Bahrain in the Refinery Gas Desulphurization Project from 2002 to 2004. He managed terminal operations and terminal construction projects for Delta Petroleum from 2000 to 2002. He worked for Turkish Petroleum Refineries Corporation at various positions between 1987 and 2000. He received his BS and MS degrees in Chemical Engineering from the University of Tulsa, Tulsa Oklahoma in 1984 and 1987 respectively.

We use cookies to distinguish you from other users and ensure that we provide you with the best experience when you use our website and for the purposes of site analytics. By using our site, you agree that we may store and access cookies, on your device. More information